Fourth edition of the only complete guide book of the valleys of Bergamo, work which has its roots dating back to 1996, when with Bruno Tassi “Camos” the founders of this publishing house wrote their first book: “Modern and sports climbing between Bergamo and Brescia”. The frenetic growth of crags in the Orobie mountains has forced them to write a book dedicated only to the territory surrounding Bergamo and now, reaching its fifth edition, the split between crags and trad routes has occurred: this volume is entirely dedicated to sports climbing, which is becoming by far the most popular sport practised in the outdoor world.

The Valleys of Bergamo offer multiple opportunities for climbing which are ideal for everyone: there are places which are very easy to reach and ideal for families and children, to walls with approach walks which turn into a small adventure. It is possible to choose an easy single pitch route covered in bolts or more difficult routes; from walls on the side of a road to those which are hidden and far away but never busy. In this volume there are thousands of pitches described because a new generation of climbers which loves discovering new crags and bolting new lines has got to work. This heteregenous galaxy of people and groups has further expanded and the work it has brought forward in these years is immense: re-bolting some old crags, discovering new ones, equipping dozens of sectors, opening new routes.

The work gathered together in this guidebook is therefore a group effort of all the bolters and route setters in the Bergamo area, who share a common passion for climbing and which has made them invest their free time and energy to enhance the valleys by bringing new routes. Many individuals but also many groups belonging to the territory, such as I Camosci who have been supporting climbing for years in Val Brembana, the popular group Climberg which operates in the lower Val Seriana, Le Lucertole from Brembilla active on Monte Corno, the Sercafalie with their fantastic rediscovery of Valle di Scalce. Finally the youngsters of Nasolino and Valle dei Mulini, della Corna Rossa di Bratto, the bolters of Alme’ and the guys of Roncobello.

Yuri Parimbelli born in Seriate in1974, has been a Mountain Guide since 2006 and has continuously carried out this activity for over 10 years. He has been climbing and mountaineering for roughly 20 years, and undertakes this activity throughout the alpine arc, favouring the disciplines in the mountains according to the seasons.

Find out how to download it for free on your smartphone: 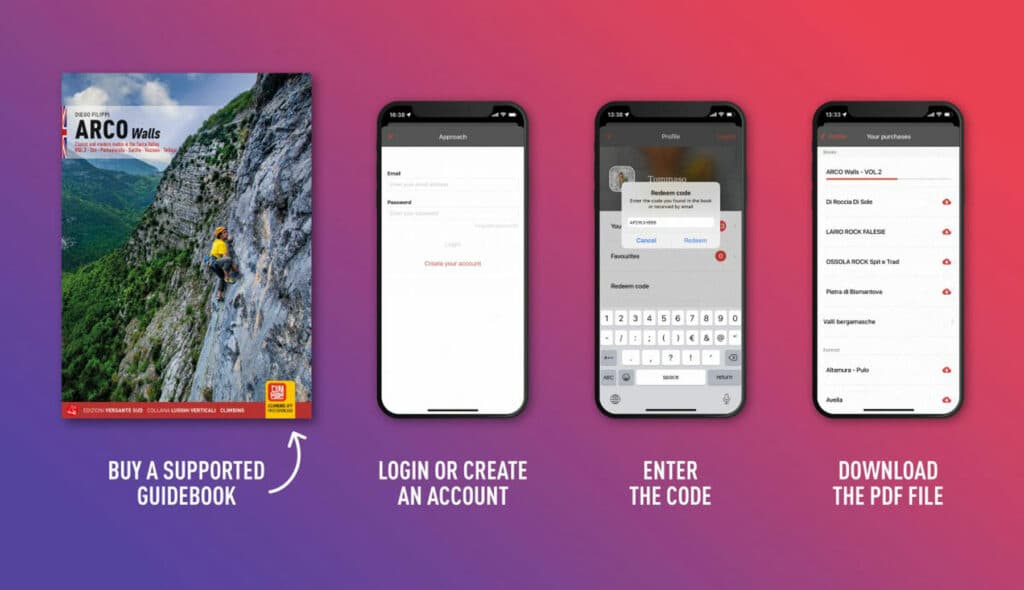 Be the first to review “Valli bergamasche Falesie/Klettergärten” Cancel reply